The I/O Registry is a dynamic database that describes a collection of “live” objects (nubs or drivers) and tracks the provider-client relationships between them. When hardware is added or removed from the system, the Registry is immediately updated to reflect the new configuration of devices. A dynamic part of the I/O Kit, the Registry is not stored on disk or archived between boots. Instead, it is built at each system boot and resides in memory.

The I/O Registry is made accessible from user space by APIs in the I/O Kit framework. These APIs include powerful search mechanisms that allow you to search the Registry for an object with particular characteristics. You can also view the current state of the Registry on your computer using applications provided with the developer version of OS X. 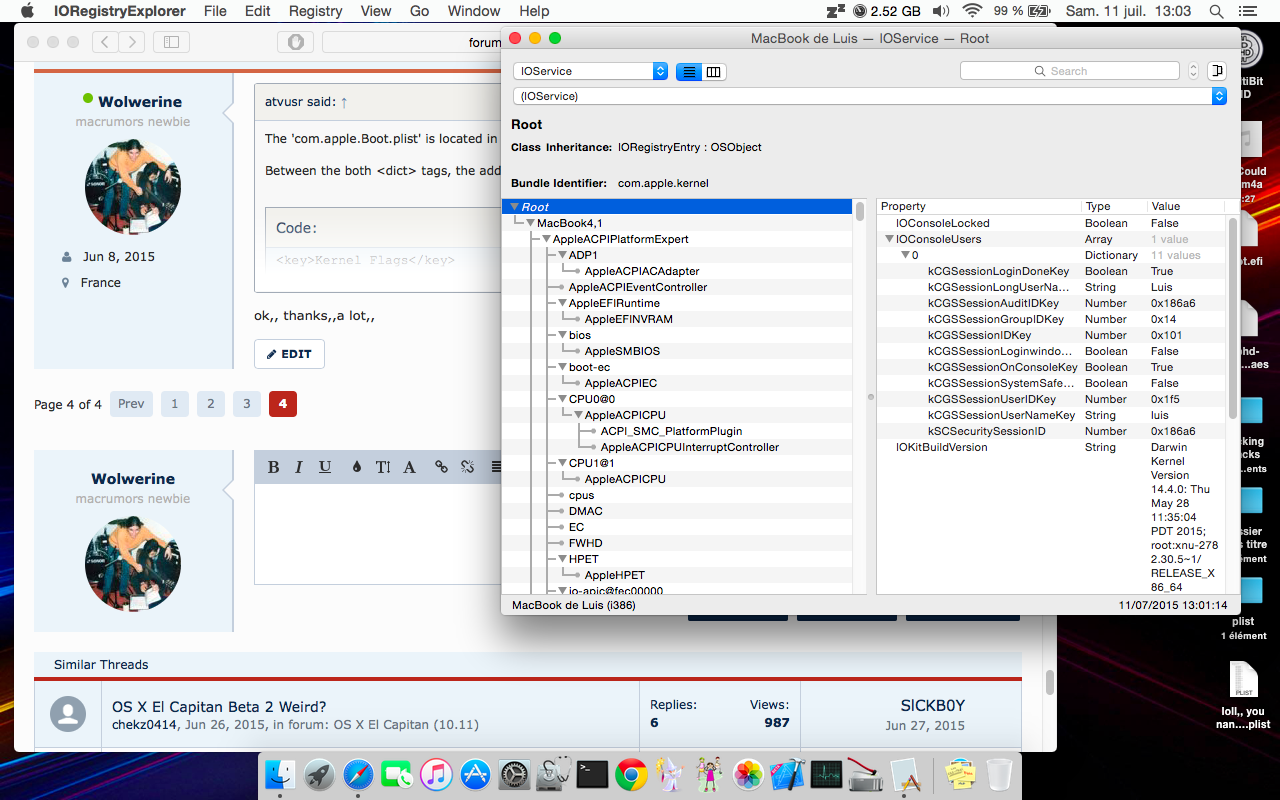 This chapter describes the I/O Registry architecture and the planes the Registry uses to represent relationships between objects. It also provides an overview of device matching and introduces applications that allow you to browse the Registry.

It is most useful to think of the I/O Registry as a tree: Each object is a node that descends from a parent node and has zero or more child nodes. The Registry follows the definition of a tree in nearly all respects, with the exception of a small minority of nodes that have more than one parent. The primary example of this situation is a RAID disk controller where several disks are harnessed together to appear as a single volume. Exceptional cases aside, however, viewing the Registry as a tree will help you visualize how it is constructed and updated.

At boot time, the I/O Kit registers a nub for the Platform Expert, a driver object for a particular motherboard that knows the type of platform the system is running on. This nub serves as the root of the I/O Registry tree. The Platform Expert nub then loads the correct driver for that platform, which becomes the child node of the root. The Platform driver discovers the buses that are on the system and it registers a nub for each one. The tree continues to grow as the I/O Kit matches each nub to its appropriate bus driver, and as each bus driver discovers the devices connected to it and matches drivers to them.

When a device is discovered, the I/O Kit requests a list of all drivers of the device’s class type from another dynamic database, the I/O Catalog. Whereas the I/O Registry maintains the collection of objects active in the currently running system, the I/O Catalog maintains the collection of available drivers. This is the first step in a three-step process known as driver matching that is described in Driver and Device Matching

Information such as class type is kept in the driver’s information property list, a file containing XML-structured property information. The property list describes a driver’s contents, settings, and requirements in the form of a dictionary of key-value pairs. When read into the system, this information is converted into OS containers such as dictionaries, arrays, and other types. The I/O Kit uses this list in driver matching; a user application can search the I/O Registry for objects with specific properties in a process known as device matching. You can also view the property lists of your computer’s currently loaded drivers using I/O Registry Explorer, an application that displays the Registry.

Keeping the tree-like structure of the I/O Registry in mind, now visualize each node extending into the third dimension like a column. The two-dimensional Registry tree, with the Platform Expert nub at its root, is now visible on a plane that cuts perpendicularly through these columns. The I/O Kit defines a number of such planes (you can think of them as a set of parallel planes cutting through the columns at different levels). See Figure 3-1 for an illustration of this structure.

There are six planes defined in the I/O Registry:

Each plane expresses a different provider-client relationship between objects in the I/O Registry by showing only those connections that exist in that relationship. The most general is the Service plane which displays the objects in the same hierarchy in which they are attached during Registry construction. Every object in the Registry is a client of the services provided by its parent, so every object’s connection to its ancestor in the Registry tree is visible on the Service plane.

It is important to remember the following points about planes in the I/O Registry:

The developer version of OS X provides an application called the I/O Registry Explorer that you can use to examine the configuration of devices on your computer. I/O Registry Explorer provides a graphical representation of the I/O Registry tree. By default, it displays the Service plane, but you can choose to examine any plane. The command-line equivalent, ioreg, displays the tree in a Terminal window. This tool has the advantage of allowing you to cut and paste sections of the tree if, for example, you want to send that information in an email message. You can get a complete description of the usage of ioreg by typing man ioreg at the shell prompt in the Terminal application.

Commands in the Tools menu help you search the I/O Registry and examine its contents:

Many users of Apple’s Mac OS X operating system have noticed a kext called com.apple.Dont_Steal_Mac_OS_X 7.0.0 – which is usually brought to users attention in crash reports that are generated to be sent to Apple. So what is it and why is it there?

In a nutshell, com.apple.Dont_Steal_Mac_OS_X prevents OS X from being used on non approved Intel hardware – as OS X is licensed only for use of approved Apple Intel hardware. Basically, it is one of the piracy prevention tools that Apple use.

Users, seem to be most concerned about the fact that this shows up on legal paid for versions of OS X on official Apple Intel hardware. Do not worry about this, it is perfectly normal.

com.apple.Dont_Steal_Mac_OS_X will appear on all versions of OS X, legal or otherwise. Apple encrypt many of the fundamental parts of the OS X operating system which on legal hardware and software, is decrypted when you use it. For example, the Finder is partially encrypted. com.apple.Dont_Steal_Mac_OS_X decrypts these fundamental parts of OS X as you use them and as a user, it doesn’t have any impact. That is unless you are using a pirated version of OS X and you are trying to use it on unofficial hardware.

If you have a pirated version of OS X or are using it on unofficial hardware you are likely to have been greeted with the following message from Apple:

Your karma check for today:
There once was was a user that whined
his existing OS was so blind,
he’d do better to pirate
an OS that ran great
but found his hardware declined.
Please don’t steal Mac OS!
Really, that’s way uncool.
(C) Apple Computer, Inc.

Obviously, as well, it will not decrypt the encrypted parts of OS X if it is pirated or being used on unlicensed hardware.

The implication that this kext only runs on pirated software / hardware is false. It will run on all versions of OS X and is nothing to worry about for your law abiding user. Next time you send a crash report, have a look at the details before sending it and you’ll see it sitting there.

The advice given on some sites about disabling this kext (or unloading it from memory) should not be followed – this will break parts of OS X, rendering it unusable.

So, in conclusion, there is nothing to worry about with com.apple.Dont_Steal_Mac_OS_X. It is completely normal. That is unless you are running a pirated version of OS X and / or using unlicensed hardware, in which case, you may have a bit of cause to worry. Anti-piracy features are becoming more commonplace and more complex as time goes on and big software companies are likely to continue to develop new and more complex ways to protect their software and its commercial value.